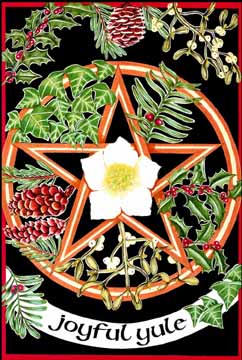 “In the depth of winter, I realized there was in me an invincible summer.” A. Camus

For many, it’s a challenge to rationally honor the ancient, yearly symbolic rite that celebrates the suspension of the wheel and return of the sun. It’s harder still to embrace the likelihood that should no one celebrate solstice (Alban Arthan), the world would plunge into perpetual darkness and ice. Solstice (from Latin sol stetit) means ‘sun stood still.’ This momentary ‘standing still’ must have been frightening, mysterious, and awe inspiring to non-druid ancestors. We know Druidism conveyed a different wisdom and response to beauty, chaos, and nature. And yet, from Neolithic to present time, in multiple guises worldwide, winter solstice celebrations occur without fail. A quick Internet survey reveals more than 35 worldwide celebrations are currently held on or near Solstice. I wondered why? I wonder if, on this shortest day of the year, you’ll live fully? Will you sacrifice a bit of your life force or draw energy to you?

Today, we recognize the scientific aspects of solstices and the significance of the 23.5 degree pole tilt. Some of us even understand cosmic physics and know that analemma (a figure 8) refers to the sun’s path during the full turn of the wheel. In the western world, the sun arcs in the sky and travels to its furthest southern destination at winter solstice.  The arc is much less at this time than at summer solstice; the sun far less brilliant. Astrologically, the sun transitions from Sagittarius (fire sign, south) to Capricorn (earth sign, north). Symbols change from the arc-like path of an archer’s arrow to the 4-footed ‘groundedness’ of a goat. Concurrently the moon moves from Gemini (air sign, east) to Cancer (water sign, west).

Why this annual ‘pregnant’ pause, celebration, forgiving of debts, quarrels—even battles, giving of gifts, toasting, sharing food and overindulging, singing, careful bathing and dressing in finery, rewards and punishments, open communications and exchanges, status reversals—al held around winter solstice? Our ancestors knew winter was a time of austerity, of food and fuel shortages, travel difficulties, long periods without light. The sun was weak; birds deserted their nests; animals hibernated. Today, most of us are sure we will survive the winter, have sufficient food, shelter and light, and can travel freely, provided we are flexible regarding unpredictable weather conditions.

Solstice is a time of intended darkness and quiet contemplation, a release of negative energy and an examination of what needs renewing. Among many Druids, the winter solar solstice celebration, like the other seven lunar and solar celebrations, is an expression of joy, gratitude and love of and for the natural world. From Samhain to Solstice Druids communicate, spread awen, and are still. Did they know Solstice served other purposes as well? Some Druids may have celebrated the overthrow of Bran (raven) by Bel (fertility) at solstice. The battle of the Oak versus the Holly king, with the outcome always the same.

In Egypt, sky goddess Nut gives birth to the sun; in China, yang, the masculine principle, begins its six month rule. Adonis, Helios, Dionysus, Marduk and Mithras were honored at solstice. In the early 4th century ACE Saturnalia (dedicated to Roman god Saturn) was high jacked by Emperor Constantine and given an entirely new purpose and name: Christmas. The common feature between solstice and other celebrations at this time is the theme of rebirth, renewal, beginning again. Astrologically, a fire earth dynamic (from Sagittarius to Capricorn) introduces us to new beginnings.

Druid astronomers accurately pinpointed the exact time of solstice. Did they use their accumulated knowledge of the natural world, earth forces, and cosmic astronomy to apply laws, rituals and customs, and organize annual, predictable events? Did the Druids also share other, more secret knowledge?

Is it possible we still sense, during this pause and stillness, extraordinary things can and do occur? Could there be a deep, collective knowledge of this moment in time, a time many call sacred, magical, or hallowed? In between times and places, like doorways, sunrise and sunset, transitions between life events and where sea meets shore enable mists to part. Other worlds and possibilities can be glimpsed. Enchantment is not just possible; it’s highly anticipated and contagious.

I don’t decorate for end of year holidays; I decorate for all seasons. One year my solstice tree was a tower of books wrapped with twinkle lights, another year it was composed of fresh fruit arranged in a series of large to small glass bowls with tiny blinking lights encircling the bowls. Last year, I brought a potted spruce indoors for a few weeks, and hung handmade twig pentacles, wrapped with hemp and sprigs of holly.

The Druid Bell Branch always has an honored place, though its official ritual purpose is to consecrate sacred space and connect to the Otherworld. Mine is a large gnarled, forked apple branch embellished with symbols special to my evolving path. Underneath the branch is a bed of fragrant evergreens (1 of the 7 chieftain trees for Irish Druids), and a ‘pick up sticks’ assortment of thick willow and oak wands and a few lengths of driftwood my hounds fetched from the local lake. Willow is thought to convey eloquence and inspiration. The oak and its acorn offspring are fertility symbols, and Druid seers once listened to rustling oak leaves to divine messages. Pine needles provide cleansing and stimulation, and mixed with juniper and cedar purify. The silver, gold and copper bells dangling from the branches are small, and have been brought back from travels near and far. Each bell is threaded with colored satin ribbons.

Solstice is a fire festival. Fire is a masculine element associated with the sky and fiery stars; fire is as much about destruction as it is about creation and renewal. Solstice fire symbols include bonfires, burning yule logs, and candles. Earth symbols include holly, evergreen trees and circular wreaths, mistletoe, reindeers and a jolly old man (or shaman) bearing gifts and the wisdom of the season. These symbols and many more like seasonal carols and the rupapapum of drums help invoke and strengthen solstice, and can put us in an exalted, magical state of mind.

Solstice helps us follow the arc that leads from the mundane to the metaphysical; it provides both comfort and joy. It reminds us our time here is short, and our absence robs the world of a bit of light and warmth. Most important, through time honored ritual, solstice helps connect the past to the present. It rekindles our sense of awe—we ‘lighten up.’ Finally, through thoughtful pause, it recharges and reaffirms our spark of human potential. Despite what a turn of the wheel has brought us in 2019, we are reminded of our potential for reinventing, reenergizing, and fully illuminating our next turn of the wheel. Happy Solstice!

2 thoughts on “Solstice: The Reason for this Season”

Tours for the Culturally Curious.

Tours from Here to There, and Back Again

Magical musings in a strange world

Willing Yourself To Win

The Not Left Handed Either Film Guide

Including ‘The Ripley Factor’ discussing representations of Women in Film

"You can't get a cup of tea big enough or a book long enough to suit me." ~C.S. Lewis

A Self-publishing Community for Authors

An inventory of the meaningful life.